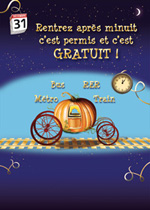 If you’re planning on heading out on the town on New Year’s Eve, the RATP has a little gift for you:  free rides on the subway, buses, trams, and RER trains throughout Ile de France from 5:00 pm on December 31st through noon on New Year’s Day.   But be advised that the Metro itself only functions in its entirety until 2:15 am.  After that, a limited number of lines (and stations on those lines)will stay open.    Noctilien bus service will be in effect with certain closures.  To get all the details, download the special guide.  Have fun!

Posted in Getting Around Town

ImagineR: A Real Deal for Kids, Teens, and Young Adults

Kids under 10 can ride buses and trains in Paris on a half price ticket.  After that, there are several special deals, one of which, the ticket jeunes weekend,  I already discussed here.  Today’s post focuses on the ImagineR pass available to students between the ages of 10 and 26.   The pass is good for 12 months of unlimited travel with the choice to the subscriber of beginning the first of September, October, November, December or January.

For zones 1-2 (which roughly corresponds to the metro system), the annual fee is 298.70 euros.  You can pay by check for the entire year or allow the RATP to deduct nine payments of 31.95 euros from your bank account.  (For the full list of fees, go to www.ratp.fr, click on “titres et tarifs” and then scroll down to and click on “Forfait imagine R.”  Or use the calculator tool on the ImagineR site.)

No matter which zones you purchase, the Imagine R pass will give your child unlimited travel throughout all of Ile de France on weekends, national holidays,  and school vacations including Toussaint, Christmas, the February ski break, spring break, and the entire summer vacation (from the beginning of July until the end of August.)

If your kids will be taking public transportation fairly regularly, getting the ImagineR is a no-brainer.  You’ll never have to worry about whether your child has enough tickets to get around town and back home again, and if it’s lost, it can be replaced fairly easily.  And if your child takes the metro or bus 5 times a week within zones 1 and 2, you will come out at least even financially, if not ahead.

Every information and ticket office within the RATP system has application materials for the ImagineR pass.   You must get  the application signed by your child’s school before submitting it by mail.  You should receive your pass within two weeks of sending it in.

For more information, go to the Imagine R Web site at: http://www.imagine-r.com/index.html (in French only).

Posted in Getting Around Town, Kids

Public Transportation in Paris: Getting Started

If you’re not used to taking public transportation, it may all seem a little confusing at first:  so many lines, so many acronyms, so many tickets!  But if you start small and then branch out, you’ll gain confidence and in no time, you’ll be switching lines and modes of transport with ease.  Here are a few basics to get you started.

Métro:  The  Métro (short for Métropolitain) is the subway system.  It is extensive with 16 lines on traditional underground/above ground trains plus 5 newer tram lines that run exclusively above ground.  Once you are in the Métro system, you can change lines as many times as you need (as long as you don’t exit the system) using only one ticket.  It runs from 5.20 a.m. to 1.20 a.m. daily plus one additional hour on Friday and Saturday nights as well as the eve of certain holidays.

Bus:  Paris also has an extensive bus system that links well with the subway.   Regular bus service is from 7:00 a.m. to 8:30 p.m.  Over night, a less extensive set of bus lines called the Noctilien is in service.

RER:  The RER was built to help suburban commuters get quickly from home to work and back again.  There are 5 lines, two of these connect to Paris’s airports.  RER tickets are priced according to distance (longer rides being more extensive) but you can use the RER within zones 1 and 2 just as if it were another line of the Métro.  That is, if you get on the RER A at Charles de Gaulle-Etoile and ride to Chatelet, you can then switch to Métro line 1 without using a new ticket.   If you have to go through a second turnstile to switch to line 1, just use the same ticket you used to get on the RER A.

SNCF/Transilien:  The SNCF is the state railway company.  Its Transilien trains serve commuters in areas where there is no RER.  For example to reach the western suburbs of St. Cloud, Garches, Vaucresson, and Bougival, you take a SNCF train from either La Defense or Gare St. Lazare.

RER and Transilien tickets are priced depending upon the distance.  You can also buy these tickets in packets of 10.

Always keep your ticket with you!  Do not throw it out until you completely exit the system.  Although you will see people jumping over and crawling under turnstiles,  don’t try to cheat the system.   Ticket control teams monitor passengers randomly; there are stringent fines if you do not have a ticket and generally you are required to pay on the spot.

Special passes are also available that may be of interest to teens and to visitors.    The Paris Visite Pass can be purchased for a 1, 2, 3, or 5 day period with separate prices based on whether it is for zone 1-3 or zone 1-5 (which includes airports).   It is good for unlimited travel during the time period and so can be quite handy for tourists, especially in inclement weather.

Students under the age of 26 can benefit from buying a Ticket Jeunes Weekend, good for unlimited travel on one day (Saturday, Sunday or a holiday) for just 3.65 euros for zones 1-3.  (Higher tarifs apply to zones 1-5 or 3-5.)  If your teen will be using public transportation frequently, you may want to purchase an Imagine R card good for unlimited travel throughout the school year.   Imagine R cards vary in price by the zones you select but are good for free travel throughout the system on weekends and holidays.

Tickets can be purchased from a booth in subway and RER stations, from station kiosks, and tabacs.  You can also buy single use tickets from bus drivers for 1.90 euros; you may not transfer to another bus with one of these tickets.

If you use public transportation frequently, you may want to consider the convenience of a Navigo pass.  To learn more, see To Navigo or Not.

For fare purposes, the Paris region is divided into five zones.  Virtually every Métro station lies within zones 1 and 2 so you should never have to purchase a special ticket if you are just using the subway.   But if you take the Métro from Paris to a suburban community in zone 3 and then want to take a bus, you would then need to use a separate ticket for the bus.   For more information, consult the zone map.  One odd little quirk to keep in mind:  the Métro station at La Defense is in zone 2; the adjacent RER A station (also La Defense!) is in zone 3.  (Don’t ask why.  It just is.)

More information, go to the RATP Web site.  Many portions are in English.

Posted in Getting Around Town